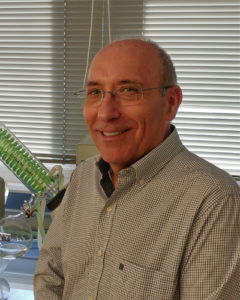 Antonio Abad was born in Valencia, Spain. He coursed Chemistry at the University of Valencia (1976) where he received his Ph.D. (1981) under the supervision of Professor E. Seonae. In 1978 he became Assistant Professor and in 1985 he spent a year as a postdoctoral research associate at the Chemistry Department of the Imperial College of Science and Technology (London) under the supervision of Prof. S. V. Ley. In 1986 he received his habilitation as Senior Lecturer and returned to the Department of Organic Chemistry of Valencia University of which he was appointed Director between 1995 and 1998. In 2010 he was appointed Full Professor at the same University where he is currently developing his research, basically focused on the Organic Synthesis of Bioactive Natural Products and Development of Immunoassays for Xenobiotics and Biotoxins. He is a member of the Royal Society of Chemistry (RSC) and the Royal Spanish Chemical Society (RSEQ).