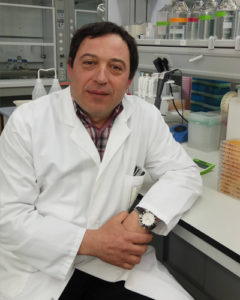 Antonio Abad Fuentes graduated in Biological Sciences by the University of Valencia in 1989. He carried out his postgraduate studies at the Polytechnic University of Valencia under the supervision of Dr. Ángel Montoya Baides, with a PhD thesis entitled “Production of monoclonal antibodies and development of immunoassays for the pesticide carbaryl “. After a postdoctoral stay at the Polytechnic University of Valencia, where he undertook the generation of immunoreagents for organochlorine pesticides, post-harvest fungicides and other N-methylcarbamate insecticides other than carbaryl, in 2003 he joined the Institute of Agrochemistry and Food Technology (IATA) , which belongs to the Spanish National Research Council (CSIC) – the largest public R & D institution in Spain. From that moment, and after obtaining a permanent position at CSIC in 2005, he began his own line of research as head of the Food Analytical Immunotechnology group at IATA-CSIC. The aim of this research group is the development of rapid analytical methods based on antibodies for the detection of chemical residues (pesticides, growth regulators, additives, antibiotics), toxins and organic contaminants in food and environmental samples. The mission of the group is to contribute to the implementation of the immunochemical methods as useful analytical tools in the Food Safety field. Official organisms and companies can take advantage of these rapid methods for monitoring xenobiotics and biotoxins in order to improve food quality and safety, and lowering the exposure of consumers to potentially harmful chemicals. Throughout his professional career, Antonio Abad Fuentes has generated antibodies to more than 40 different analytes, including yeasts, viruses, proteins, fungicides, insecticides, growth regulators and biotoxins.